This is the thirty-seventh episode of Skepticule Extra — aka theThree Pauls Podcast.

Send feedback to feedback@skepticule.co.uk, write a review oniTunes or post a comment below. There is also a Skepticule Extra Forum for further discussion of topics covered in the show (plus other topics). Follow the link to try out the forum.

The man who presides over the worlds largest paedophile ring has recently accused Atheists of denying human dignity. 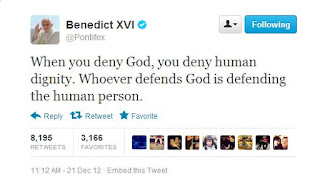 This is the man who actively suppressed knowledge of the global child abuse scandal within the Catholic Church in case it damaged the reputation or the assets of the Church.

This is the man who on Dec 12th 2012 bestowed his blessings on Rebecca Kadaga, the speaker of the Ugandan legislature who is sponsoring the 'Kill the Gays' Bill.

This is the man who organised special dispensation for Robert Mugabe, one or the worlds top 10 evil dictators to bypass an EU travel ban so he could attend the Beatification ceremony of Pope John Paul II.

This is the man who had his butler arrested and jailed (and forgiven) for exposing corruption and money laundering within the Vatican Bank.

This is the man who smacked down Dominican Nuns because they wanted the Catholic Church to focus less on issues of sexual orientation and more on social justice and the human dignity of all people... including women.

This is the man who condemns 2 million people to death from AIDS every year in Africa because he has decreed the wearing of Condoms is a Sin in the eyes of God.


This is the man who has the audacity to lecture me on Human Dignity.

National Catholic Register pulls article blaming the children for their own abuse.

Pope's anti-condom message is sabotage in fight against Aids