Well, His Holiness Pope Francis is of to a good start.

It seems he's got rid of the outrageously extravagant golden throne and replaced it with a more modest plain white chair.

Gone too is the raised platform carpeted in finest red trimmed in gold. 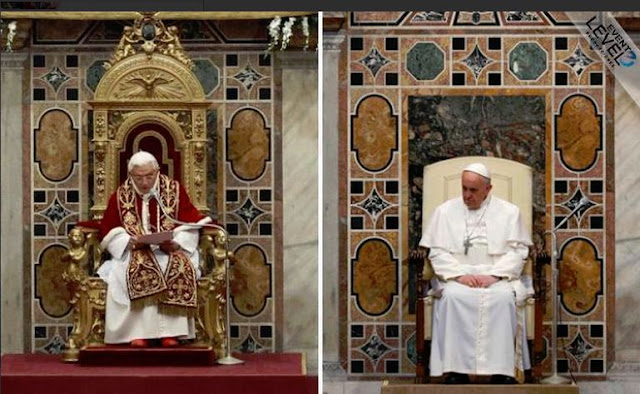 The ermine lined red velvet cape and the elaborately gold embroidered stole are conspicuous by their majestic absence.


That's not all... Those beautiful red loafers, hand crafted by Pope Benedict's personal cobler: Andriano Stefanelli are replaced by comfortable plain black lace-ups, a little battered but well cared for. 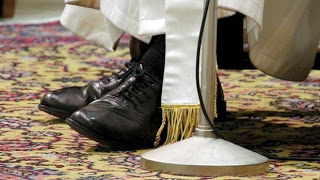 Gone is the beautifully intricate golden crucifix depicting some guy hanging from a torture device, replaced by a simple iron cross.

The solid gold Papal ring belonging to Benedict, according to tradition, now has to be destroyed, presumably in the fires of Mordor. Pope Francis has opted for a simple silver plated signet ring.

There is a saying "The Clothes Maketh the Man". If this is so, I'm expecting to see a switch from a Vain, arrogant, self glorifying hypocrite to someone who is more in touch with reality, someone who realises such a vulgar display of extravagant wealth is offensive to most of the world, especially to those living in abject poverty and doubly so when the man festooned in Golden Bling, living in a palace is pointing his finger at the rest of the world criticizing us for greed and the desire for material wealth.

My hope is that Pope Francis will also have a clear out of all the perverts, corruption and hypocrisy from within the clergy. Perhaps this is too much to ask. It maybe the case that the Vatican expects superficial changes to the Papal image and a thorough PR makeover will divert our attention from the fundamental flaws within the Roman Catholic Empire.

I could be very mistaken in my observations. It maybe the case that the Papal Throne makers are at this very moment constructing an even more elaborate display for another Peacock Pope... but so far... this does not seem to be the case. While far from acceptable, things do seem a little less repugnant in the Vatican.

Only time will tell.