"Hey Atheists, You're going to Burn in Hell"

I don't think Gervais needed to single out the tollerance of Satanists, most religions are equally as tollerant.I have friends of very diverse religious backgrounds most are pretty cool with the beliefs of others even when they disagree.My Wiccan and Pagan friends all seem to be genuinely nice, tolerant and friendly people (a little eccentric but still nice people). Hindus and Sikhs also seem to be nice guys and non-judgmental along with Buddhists, Shinto and even Jews.These religions all have one thing in common, they're all Non-Proselytizing religions.When it comes to Proselytizing religions like Christianity and Islam, then we often get to see the insults, condescending language, sarcasm and patronizing arrogance. Atheists are not immune to this behavior either. However, This behavior in Atheism is generally a mirror response to the behavior of Proselytizing rhetoric and baseless assertions.I agree that it's only Christians and Muslims who inform me with great glee and smug satisfaction that I'm going to burn in Hell for all eternity in excruciating pain and agony, never the Hindus, never the Pagans, Never the Jews.The thing I find disturbing is the glee and smug satisfaction of the evangelist when they inform me of my fate.For any "normal" person, if they see someone walking towards extreme danger and almost certain death/rape/contagion/injury they would do anything they possibly could to rescue that person from a terrible fate.If you saw a known pedophile trying to coax a small child into the back of a van, you know that child through their own ignorance is going to come to extreme harm or even death.You would do anything in your power to rescue that child even risking your own life to do so.Not so with the fundamentalist Christian mindset. They believe you, through your own ignorance are walking toward an eternity of pain and torment and yet they smugly point their fingers and gleefully proclaim you are going to burn in Hell. If a "normal" person genuinely believed this, they would be doing everything in their power to save you, not smugly boasting about the certainty of their own salvation in Paradise and your eternal torment. This is the perceived behavior of a stereotypical Satanist, but it would seem even Satanists are not that mean.Even in the Christian Facebook and Reddit Groups I frequent which I consider to be quite gentle and well moderated, there are fundamentalists who genuinely believe I'm going to burn in Hell. And yet in all our discussions, no one has made any attempt to save me from my terrible fate. Discussions seem to revolve around "wanting to be right and prove the other person wrong".Yes, Atheists here do the same thing, but we don't believe the fundamentalists are in terrible danger of eternal damnation. The sarcasm used by Atheists is a response to this mean, uncaring attitude. Atheists rarely talk to Buddhists, Hindus, Pagans or even liberal Christians in this way. Atheistic parody and sarcasm is generally directed at the people who make direct negative assertions and claims about the values of Atheists.LOL, Somehow I immediately hear those smug Fundamentalists saying "Atheists don't have any values".
Posted by Paul at 12:11 No comments:

Therapeutic Magnets and the Iron in Blood

An Interesting Experiment.
Therapeutic Magnets and how they interact with the iron molecules in hemoglobin.
The result isn't what I expected.

One of the many claims made for Therapeutic/Healing Magnets is that the iron in the Blood is is attracted to the Magnets, thus increasing the flow of blood to the affected area.

So the amazing Brainiac75 set out to see exactly what happens when you place a Monster Neodymium Magnet next to Blood.

The result isn't quite what you would expect.

How to win an argument

Schopenhauer's 38 Stratagems, or 38 ways to win an argument.

Schopenhauer was a brilliant German philosopher who never quite achieved the fame of his contemporaries Hegel and Kant, but he left a wealth philosophical material that inspired such minds as Neitzsche and Einstein.

Sadly, his excellent, sarcastic treatise on the dirty tricks and dodges used by dishonest debaters has almost become the De facto standard training manual for all kinds of Religious Fundamentalist, Quack, Pseudo scientific, Conspiracy, Supernatural, UFO and Mystical advocate.... and of course it is the Gold Standard for all Politicians.

The following is a list of those dishonest debate techniques.

I would suggest you listen to any political or religious debate and see how many of the 38 stratagems have been used.

Arthur Schopenhauer (1788-1860), was a brilliant German philosopher.
These 38 Stratagems are excerpts from "The Art of Controversy", first translated into English and published in 1896.


Schopenhauer's 38 ways to win an argument are:


I was brought up in the industrial North East of England, Middlesbrough to be precise.

I remember many times on the 163 Bus to Redcar, going past the ICI Wilton complex, filled with awe and wonder at the spectacular industrial landscape through the bus window.

Occasionally I would be treated to a giant flare from one of the oil cracking towers which for a few seconds, turned night into day for miles around.

Now, 42 years later I find out that Ridley Scott was also spellbound by this same view of ICI Wilton. He commented:

“There’s a walk from Redcar … I’d cross a bridge at night, and walk above the steel works. So that’s probably where the opening of Blade Runner comes from. It always seemed to be rather gloomy and raining, and I’d just think “God, this is beautiful.” You can find beauty in everything, and so I think I found the beauty in that darkness.”


I've seen Blade Runner several time and for some reason never made a connection between the view out of that bus window 42 years ago and the opening sequence to Blade Runner.

Now that I see the pictures side by side, I'm having a face-palm moment.


I suspect Ridley Scott may have met one of my girlfriends from that area when I was just a teenager. She may have inspired him to write "Alien".

We have a problem... 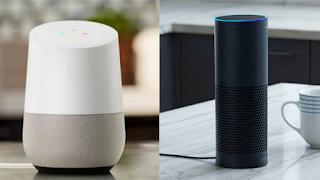 Alexa replied: "I'm not sure"

... which is fine, a bit non-committal, possibly she's apprehensive about being dragged into a heated debate.  Perhaps she'll sound me out, test the waters before she gives an answer I'll approve of.

So I asked Google.

Google replied:
"Homeopathic remedies do really work. There are some problems in which Homeopathy is the best alternative, leaving no side effects as those of the 'so-called' modern medicines."

Does anyone have the emergency hot-line number for Michael Marshall?

I found this a little unsettling so I asked Microsoft Cortana:

Cortana replied:
"Sound of China Guzheng Music is formed by gu-zheng lovers. We are dedicated to promote the music of this beautiful Chinese zither in..."


An interesting (and civil) discussion with a Biblical Scholar.

It demonstrates some of the problems when using Biblical texts as an authoritative historical record.

I'm so glad I don't live in the land of the free where they have liberty and justice for all.
It sure does look like a corrupt oppressive tyranny to me.

This needs no commentary from me.

Written and produced by the British Humanist Association

Animated by SkeptiSketch
Posted by Paul at 18:26 No comments:

If you share this post with 20 of your friends in the next 24 hours, you are guaranteed a major cash windfall and extreme good luck within the following week. People will admire and respect, you will never need to cut your toenails again and you will be able to fart rainbows on demand.

If you don't share this post in the next 24 hours, your genitals will shrivel up and fall off while you are in the supermarket, everyone will point at you and laugh, you will grow un-trimable nasal hair and the Jehovah's Witnesses will call every Saturday at 7:30. 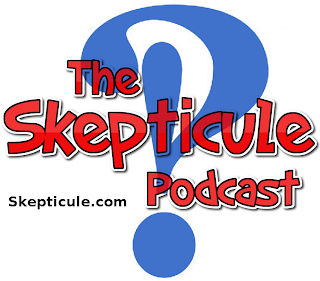 Today, my lovely daughter sent me a link to an article about the first official Lung Cancer death caused by eCigs (Electronic Cigarettes).

I use an eCig and she was concerned that I may be harming myself while under the impression eCigs were much safer than Tobacco Cigarettes.

This is the article:- 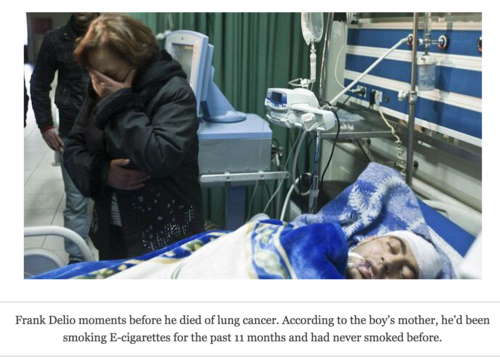 
It looks convincing doesn't it?

But there are several red flags and it didn't take too long to get to the bottom of this article. 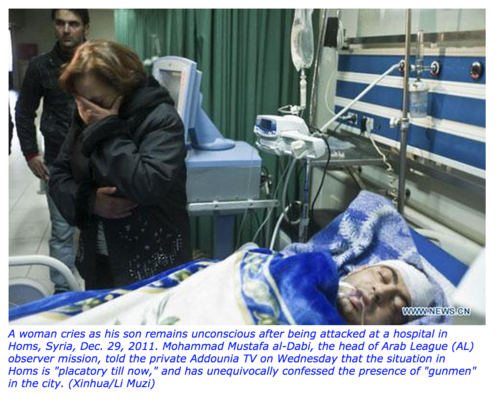 Here is another picture of a distraught mother at the bed of a young Muslim boy who was attacked in a hospital in Homs, Syria as reported by a Chinese News Agency in 2011.... with a slightly different caption.

Notice the: www.news.cn tag bottom right has been deliberately cropped from the first picture.

There are no Obituary records for the death of a “Frank Delio” for the whole state of Texas.
The nearest I can find is for a David Francis Delio but he was 73 when he died.

In fact this particular Frank Delio does not seem to exist anywhere on the internet which is very unusual (but not impossible) for a 17 year old Texas boy.

The site reporting this tragic cancer death is a “Click-Bait” site that posts salacious and provocative posts to generate clicks. This gives them increased affiliate advertising revenue.

There are thousands of “Click-Bait” sites especially on Facebook who’s only purpose is to get you to click on them. They have no real content, no product and no service, they just need you to click so they can make more money from advertising other people’s products and services.

According to the World Health Organisation (WHO) about 5.4 million people die each year from Smoking related illnesses.  Even if the above story was not a fake, I’d rather be in the 1 death/year group than the 5.4 million deaths/year group. Call me reckless, but it’s a risk I’m willing to take. It would seem that to-date, there have been 0 deaths that can be directly attributed to the correct use of eCigarette products.

I’m still open to evidence though, but that evidence must come from a recognized authority or from well researched statistical evidence, Not from Click-Bait sites or from medical speculation or from people with a conflict of interests.